Do face masks contribute to the COVID-19 death count?

The most lethal possible consequence of influenza is pneumonia. Some doctors claim that the wearing of masks may increase the risk for pneumonia.

It is a square assumption that coughing, and sneezing is the body’s attempt to get rid of unwanted substances in the throat, the nose and the sinuses. During an influenza, the main task of coughing and sneezing is of course the getting rid of virus!

Much virus assembles in the face mask. Breathing it in, there is a danger of getting an increased number of viruses down into the lungs.

In spite of the reports and discussions about the connection between face masks and pneumonia there seems to be no recent studies either verifying or debunking the assumption that wearing face masks when you are infected may increase the risk for pneumonia.

To find evidence we can go back a decade.

According to an article based on solid research that was published by the US National Institute of Health (NIH) on Tuesday, August 19, 2008, the largest killer during the Spanish Flu was pneumonia from bacterial infection. An important factor assisting the bacterial infections was that virus by destroying the protective layers in the throat opened the way for bacteria to enter the lungs.

“Preparations for diagnosing, treating and preventing bacterial pneumonia should be among highest priorities in influenza pandemic planning,” the authors write.

The majority of deaths during the influenza pandemic of 1918-1919 were not caused by the influenza virus acting alone, report researchers from the National Institute of Allergy and Infectious Diseases (NIAID), part of the National Institutes of Health. Instead, most victims succumbed to bacterial pneumonia following influenza virus infection. The pneumonia was caused when bacteria that normally inhabit the nose and throat invaded the lungs along a pathway created when the virus destroyed the cells that line the bronchial tubes and lungs.

A future influenza pandemic may unfold in a similar manner, say the NIAID authors, whose paper in the Oct. 1 issue of The Journal of Infectious Diseases is now available online. Therefore, the authors conclude, comprehensive pandemic preparations should include not only efforts to produce new or improved influenza vaccines and antiviral drugs but also provisions to stockpile antibiotics and bacterial vaccines as well.

…. "The weight of evidence we examined from both historical and modern analyses of the 1918 influenza pandemic favors a scenario in which viral damage followed by bacterial pneumonia led to the vast majority of deaths," says co-author NIAID Director Anthony S. Fauci, M.D. "In essence, the virus landed the first blow while bacteria delivered the knockout punch."

…. Examination revealed a spectrum of tissue damage "ranging from changes characteristic of the primary viral pneumonia and evidence of tissue repair to evidence of severe, acute, secondary bacterial pneumonia," says Dr. Taubenberger. In most cases, he adds, the predominant disease at the time of death appeared to have been bacterial pneumonia. There also was evidence that the virus destroyed the cells lining the bronchial tubes, including cells with protective hair-like projections, or cilia. This loss made other kinds of cells throughout the entire respiratory tract — including cells deep in the lungs — vulnerable to attack by bacteria that migrated down the newly created pathway from the nose and throat.

…. From a pool of more than 2,000 publications that appeared between 1919 and 1929, the researchers identified 118 key autopsy series reports. In total, the autopsy series they reviewed represented 8,398 individual autopsies conducted in 15 countries.

The published reports "clearly and consistently implicated secondary bacterial pneumonia caused by common upper respiratory flora in most influenza fatalities," says Dr. Morens. Pathologists of the time, he adds, were nearly unanimous in the conviction that deaths were not caused directly by the then-unidentified influenza virus, but rather resulted from severe secondary pneumonia caused by various bacteria. Absent the secondary bacterial infections, many patients might have survived, experts at the time believed. Indeed, the availability of antibiotics during the other influenza pandemics of the 20th century, specifically those of 1957 and 1968, was probably a key factor in the lower number of worldwide deaths during those outbreaks, notes Dr. Morens.

The cause and timing of the next influenza pandemic cannot be predicted with certainty, the authors acknowledge, nor can the virulence of the pandemic influenza virus strain. However, it is possible that — as in 1918 — a similar pattern of viral damage followed by bacterial invasion could unfold, say the authors. Preparations for diagnosing, treating and preventing bacterial pneumonia should be among highest priorities in influenza pandemic planning, they write. "We are encouraged by the fact that pandemic planners are already considering and implementing some of these actions," says Dr. Fauci.”

(Comment: Dr. Fauci was one of the co-authors of this study. This may be the reason why he, as President Trump's top adviser at the time of the outbreak of the pandemic, advised against face masks. Why he later changed his mind is not known.)

The National Institutes of Health (NIH), the nation's medical research agency, includes 27 Institutes and Centers and is a component of the U.S. Department of Health and Human Services. NIH is the primary federal agency conducting and supporting basic, clinical, and translational* medical research, and is investigating the causes, treatments, and cures for both common and rare diseases. For more information about NIH and its programs, visit www.nih.gov.

*Translational research means that problems that are discovered in healthcare, for example during diagnosis or ongoing treatment, are used in development and research before clinical trials.

And here, some history:

In the 1918 flu pandemic, not wearing a mask was illegal in some parts of America. What changed? 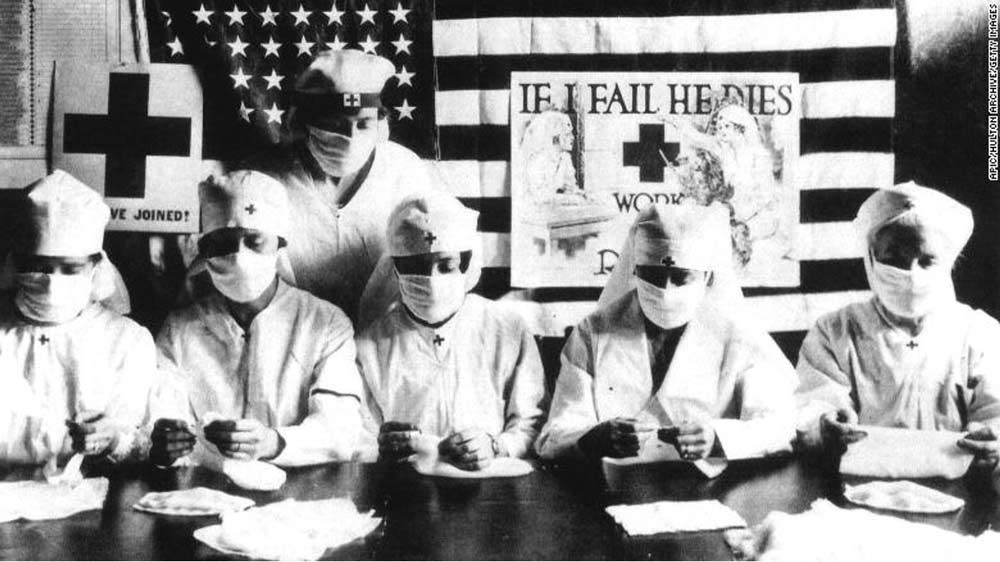